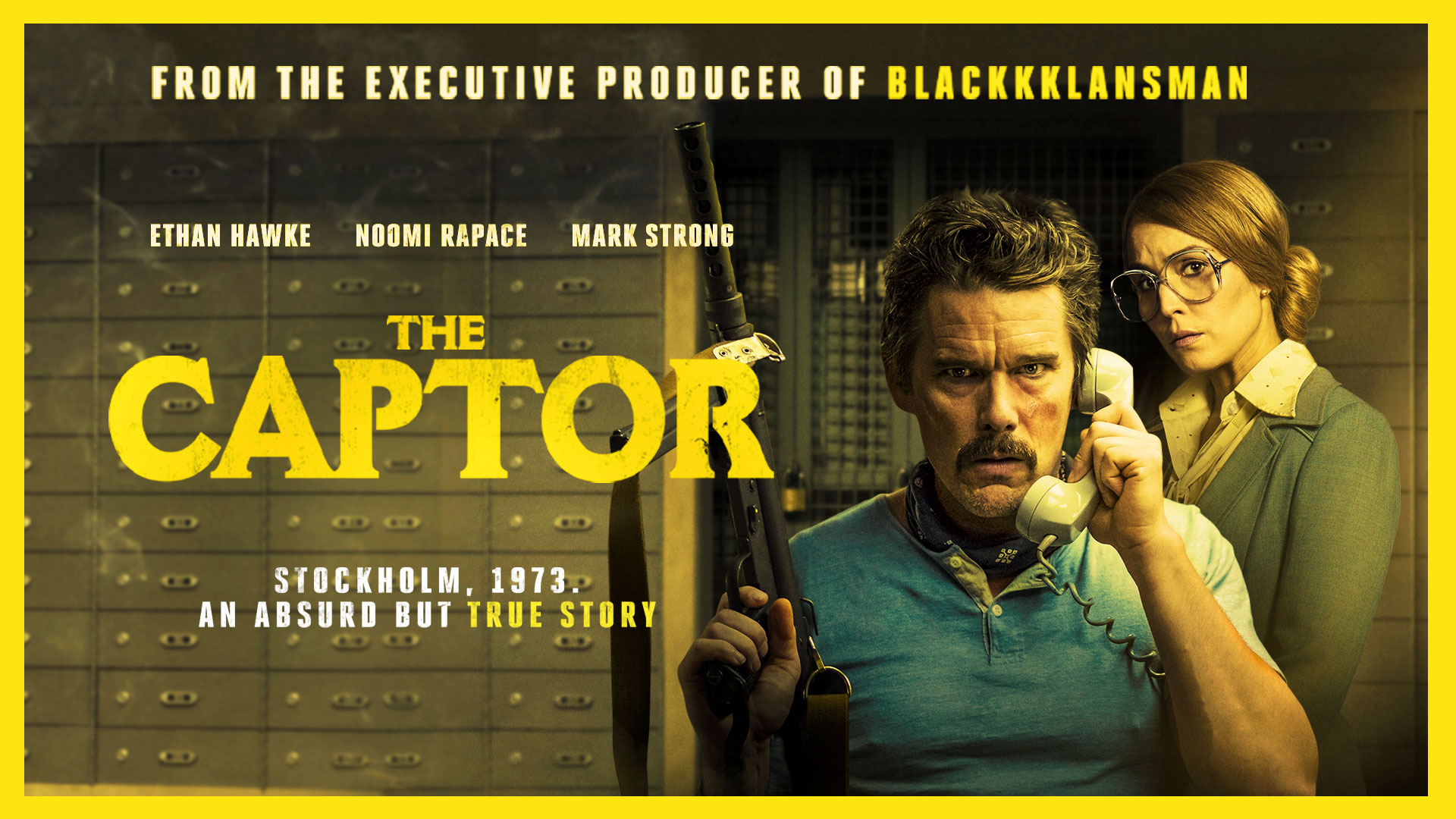 Few films explore Stockholm syndrome; however, this is the first time any film depicts the origin story from a comical angle. “The Captor” starts with a message “Based on an absurd but true story” but then continues with the heavily fictionalized version of the actual events. Nevertheless, Ethan Hawke and Noomi Rapace make this movie very enjoyable and show that good actors can make any material great whenever they are allowed.

The action takes place in Stockholm in 1973 when a Sweeden born American raised criminal, Lars (Ethan Hawke), walks into a local bank fully armed. He lets the majority of the employees and clients out of the bank. Still, he keeps two hostages, one of them being Bianca (Noomi Rapace). Lars demands one million dollars and an escape vehicle. It’s evident from the start that his hostage tactic is more focused on getting his friend Gunnar (Mark Strong) out of jail.

The negotiations between Lars, the police chief Mattson (Christopher Heyrdahl), and Swedish prime minister Olof Palme (Shanti Roney) begin. Bianca realizes that the system will fail her as usual, and she decides to side with Lars. During the six days of the hostage situation, Bianca and Lars make a successful bond. Finally, she decides to help Lars pull a diversion by fake killing her to carry out his escape plan.

“The Captor is at its most fun playing psychological cat-and-mouse between Lars and local police chief Mattsson (Christopher Heyerdahl, excellent), who seems far more interested in psyching out Lars than with the hostages’ welfare. During the first half, an energetic Hawke has a ball as a rock ’n’ roll perp, all cowboy hats and easy swagger, demanding a million U.S. dollars, a clean exit from the bank and an escape vehicle — “a Mustang 302, like Steve McQueen had in Bullitt”. Lars’ plan — hinging on a fake killing — is ridiculous, but Hawke makes his smart/stupid dynamic winning.” – Empire

“The Captor” at moments looks so sterile that we forget that the action is set in the 1970s. In addition, the director Robert Budreau struggles with his attempts to create a comedy of absurdity which he promised in the opening title. Still, Ethan Hawke and Noomi Rapace manage to pull the best out of their characters and make this film entertaining. Unfortunately, next to them, the rest of the cast members are reduced to extras. Nevertheless, this crime movie with comedy elements definitely deserves your attention, and you can stream it now on Watch4Free.